In Defence of Leadership

A great many ordinary folks in business and on the street are taking quiet comfort from an address at a recent investment conference that is rumoured to have caused disquiet in the Union Buildings, with the President himself expressing disbelief. Finally, a significant entrepreneur spoke truth to power, articulating what many have long sensed but felt too timid about expressing. In case you have not watched it, this is, of course, the recent address by businessman Rob Hersov. Sobering and brutally honest, it holds no punches, and its resonance has made it go viral – no mean feat for a speech meant for a narrow audience.

We have to admire Hersov’s spirit and grit. For too long, others have been spineless, and our discourse has only suffered for it. What is even more striking, and it comes as a gust of fresh air, is that not only does Hersov not mince his words, but he also names and shames. It has long been glaringly apparent that our cabinet ministers are party loyalists without the skill to run even a little US town yet are cloaked in power that far exceeds their cognitive abilities. It is thus comforting to now hear a more honest appraisal of, for instance, Fikile Mbalula – currently the minister of transport and formerly of sports and police, a jack of all trades and a professional politician – as charming and pleasant but hardly an intellectual giant; a ‘stupid person that ‘no one would hire in the business they own.’ Nkosazana Dlamini-Zuma – formerly minister of health, foreign affairs, the presidency, and home affairs, a fitting peer to Mbalula – is called out for her racism and being a ‘nasty person. Deputy President Mabuza is the ‘devil’ the President did a deal with. Former President Zuma’s son, Duduzane, is a scion of a scumbag family’ with a ‘horrific last name.’

This deplorable bunch are the ones who are making SA’ uninvestable, along with their neo-Leninist policies of ‘over-regulation and black empowerment, which is another word for ‘theft.’ Luckily, we have ‘insane’ people like Hersov, who are not only ‘crazy’ to come back and invest but also have the testicular fortitude to speak up against everything wrong in our body politic. More than that, it takes insight in addition to the courage to resist the notion that one is dealing with enlightened parliamentarians in a rarefied atmosphere. One deals with rent-seekers, demagogues, just plain thieves and con artists, who relish sycophancy and polite reserve – but only understand straight talk. Speaking in the language of the thugs earns Hersov maximum respect.

If before that speech went viral, one could argue there was no one flying the flag for business, that sentiment is now evaporating and giving confidence to many. That cred is now translating into a rallying call around Hersov from the voiceless and the unheard. Dollar billionaires like Patrice Motsepe, the President’s brother-in-law, who ‘should be saying something but don’t’ – the rest have left the country – have refused the mantle of business leadership that is so sorely lacking. Hersov has boldly assumed it. The commentators giving him flak for being a third-generation rich kid riding on his father’s coattails are missing a significant mark; 70% of family wealth dissipates in the second generation and 90% in the third. For a descendant to found an aviation business and then sell it to Warren Buffet, one of the world’s most astute investors, speaks volumes for the man’s insight, the aviation business being one of several. This makes him the exception, not your average heir. 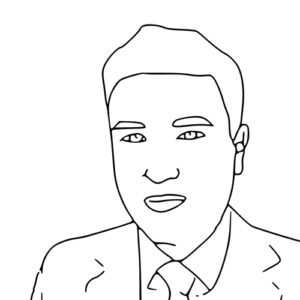 Sebastian Chatov is the founder and chief executive of Appanagium Capital, a corporate finance boutique.